The application note purpose is to guide the user in performing an optimal opacity setting accordingly to the active rendering modality.

Making more or less transparent the biological structures, digitally acquired in their complex world, allow us to see through the objects in the foreground. The contribution of the voxels in
front of you, referred to your point of view (camera view), is reduced comparing to their real intensity value. The intensity reduction is obtained by editing their opacity coefficient
accordingly to our visualization needs. This operation is defined as the single voxels intensity values mapping vs the opacity coefficient.
However, this allows only a limited selection of the structures in the dataset, like specific structures or anatomical regions, since no spatial or specific information is considered. Since the
structures do not just differ by intensity values, opacity is typically not suited for the selection or identification of objects in a dataset but only to improve its visibility. 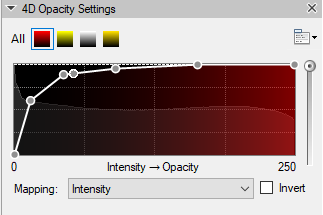