arivis VisionVR is an image analysis software designed specifically to allow the visualization of 3/4D image data and the analysis of those images.  The ability to visualize and navigate datasets in virtual reality is highly dependent on the capabilities of the system the software will run on, most specifically the Graphics Processing Unit (GPU/Graphics Card), but also on other hardware factors. This article discusses the hardware considerations and provides advice with regards to what systems are supported and recommended.

Virtual reality is in some ways a relatively old concept, but recent developments in computing hardware and software have made this a lot more accessible to a much wider audience. Virtual reality differs from stereoscopic projection, as is common in 3D video systems, in a couple of significant ways.

First, pure stereoscopic projection systems do not account for the position of the observer and how their viewpoint might change. The view is stereoscopic (meaning that it is slightly different from one eye to the other), but the perspective is fixed and does not respond to the observer turning their head or changing position.

In contrast, VR systems recalculate the view as the user moves in the virtual environment which requires both situational awareness through the detection of head position and movements, and efficient recalculation of the point of view based on these changes. Atop this is also the requirement to calculate two separate points of view (one for each eye).

Due to the specific impact of vision on human's ability to balance themselves, it is also very important that there be no perceptible lag between the user's head movements and the redrawing of the virtual reality scene. This generally means a lag of 5ms or less and a frame rate of 60Hz at least for a comfortable VR experience.

Most modern GPUs are capable of achieving these frame rates for one render at a time, and in many cases, this is done by rendering polygons. This is a process that GPUs have been designed to do for many years and are highly efficient at. However, for the use case of visualizing 3D image data, the process of converting voxels to polygons is impractical in most cases and VisionVR relies instead on a method of direct voxel rendering requiring no or little preprocessing of the data prior to visualization.

Because of all these factors, arivis VisionVR requires a high-end GPU to provide a comfortable and useful VR experience, and therefore, the minimum supported GPU is the NVIDIA GTX1080Ti. Newer, faster cards exist and these are highly recommended. arivis typically recommends a minimum of NVIDIA RTX2080Ti, and an RTX3080 or above is preferred.

Note that these are gaming cards, rather than the "professional" Quadro range. This is because equivalent Pro GPUs that would offer a similar level of performance are typically much more expensive than the Gaming cards we recommend without offering any significant advantages with regards to how VisionVR performs. If your computer is already equipped with a pro card of equivalent specification to these recommended above, there is no need to replace those. Simply, if purchasing a system specifically with arivis VisionVR in mind, gaming cards offer a much better value proposition.

Please also note that the graphics card will need to be equipped with at least 2 DisplayPort outputs; one for the computer display and one for the VR headset. Also, older Oculus Rift models used an HDMI connection, so check that your card has this port if you'd like to use this model.

At present, arivis VisionVR only supports the Oculus Rift and Quest 2 VR systems. Support for other manufacturers may come in the future, but since the Oculus development libraries were used to develop VisionVR this is currently the only supported vendor.

The Oculus Rift S is the recommended headset in conjunction with a windows PC equipped with one of the recommended GPUs. Note that this headset can be equipped with either an HDMI or DisplayPort video connection and you should make sure that whichever is selected will be supported by the GPU. Many GPU vendors build cards with only one type of port.

Additionally, this headset requires at least one free USB 3.0 port to handle communications between the headset/controllers and PC.

The Oculus Quest 2 headset is also supported, but only when used with the Oculus Link connection.

Note that when using Oculus devices you also need to enable unknown sources to work with the hardware in the settings. To do this, go to the Oculus App and click on Settings on the left of the main window. Then, in the General tab enable the "Unknown Sources" option. 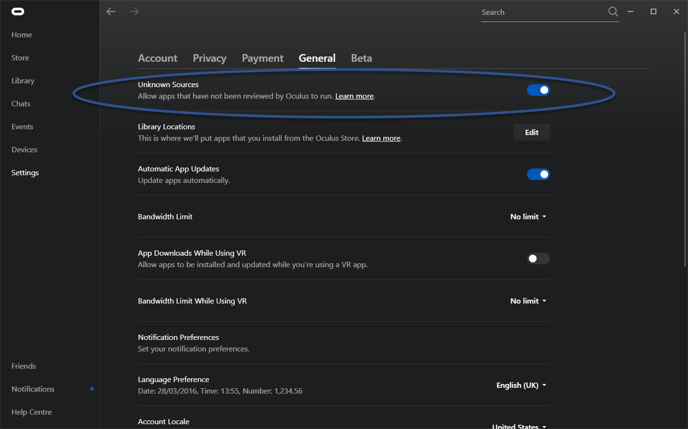 Aside from the graphics card and VR headset, it is also necessary to use a computer that supports them and the software.

Generally, laptop computers are not recommended for this application. VR is a highly computationally intensive application for which the GPU requires a lot of power and this results in the generation of a lot of heat, which laptops are generally poorly equipped to disperse. Some high-end gaming laptops will support arivis VisionVR but are often very noisy due to the fans and constrained thermodynamics of such compact systems. They are also much more likely to drop the connection to the headset due to power saving features. Desktop systems are therefore highly recommended.

In terms of basic computing, the following are the minimum requirements:

The following hardware components and graphics cards have all been tested successfully with arivis VisionVR. Individual components may be discontinued by the manufacturer, however, we try to keep this list up-to-date and exchange those components for equal or better available alternatives.

This list summarizes the components of demo machines used by arivis.

This list summarizes GPUs that have been tested by arivis and deliver satisfactory performance in varying PC setups. In general GPUs with less than 6GB VRAM are not recommended.