This article describes the activation and configuration process specifically for network licenses.

As described in this article on general software activation, arivis Vision4D is protected by a 3rd party license management software. This license management is based around the concept of keys that grant users access to the software and specific features thereof. The key or license can come in a 2x2 major distinctions.

First, licenses can be either

And in either of those cases, the license can also be

Hard keys do not require activation as the license is already activated on the dongle when shipping, but soft licenses must be activated to lock the key to the user's computer. Network licenses need only be activated once on one computer that from then on serves as the license server. Floating licenses may require some additional configurations on both servers and clients to permit the distribution of the license.

The first and most important thing to note with network licenses is that the license must be based on a single computer.

That computer doesn't need to be a Server in the typical sense of the term, but it should definitely be a computer on the same network as the clients and it should preferably be a computer that can be left on so that clients are always able to access it. In that respect, putting the license server on a server computer is usually preferable.

On Windows computers, the License Tool can be installed as part of a Vision4D installation, or stand-alone using this link.

Once downloaded, the process is as follows:

In most cases, this will be all that is required. The License server will start and any installation of arivis Vision4D on computers on the same network should be able to see the license when launching the application. However, in some cases, some additional network configuration may be required.

On Linux computers, a generic Sentinel driver is available for several Linux distributions here, which should be all that's needed for Hard keys. To use a software license key (SL key) you can download the License Tool for Linux here.

And again, in many cases that will be all that is required, but check the network configuration instructions below.

The license server broadcasts available licenses on the network to which it is connected for clients to see when Vision4D is started. This broadcast is done through a specific network port, which must be open on both the server and clients. Please ensure that port 1947 is open for TCP/IP on any firewall on both the server and client computers. You can test that the port is open using a Ping command to that specific port. If the ping does not work, please contact your IT support team.

The License Tool allows the user to do several things, like activating or transfering license, but some additional options are available to check the license status, monitor license usage, or limit who can access the license. In either Windows or Linux machines, these additional tools can be accessed by opening a web browser and entering this address: 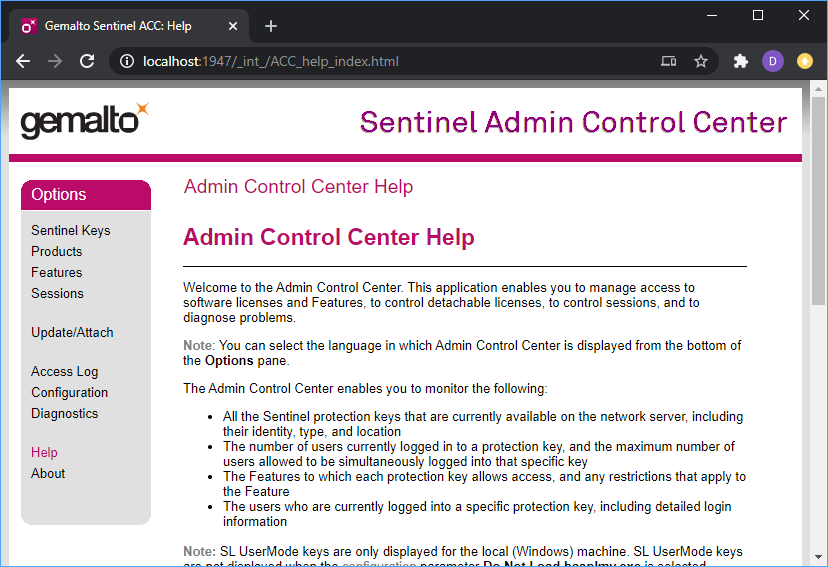 Here, users can use the links on the left to check the status and validity of all licenses available on the current computer, check the access log to monitor usage, and use the Configuration tools to specifically instruct a machine to actively seek or block connections for specific IP addresses.

In most cases, network license configurations are relatively quick and easy, but if you have issues accessing the license, please check our troubleshooting article for more information or use the downloadable version of this article below which also contains more details.